2017’s been quite a year for Information technology. I’m still spellbound by the interview video of the humanoid called Sophia that won the internet, in which she talks no less than a human.

It was just yesterday we were talking about bots and how they can make our lives easier, can’t believe we’re already there!

And there is no stopping, with every new technology rolling out, your desire for better will keep soaring. You entrepreneurs will have the biggest opportunities ever to make the best use of the technologies for your business’ benefit. So brace yourselves and read on!

The boom is going be similar to the dotcom bubble of the 90s, with critics clamouring about its repercussions and the rest picking its fruits. A similar pattern has already been followed by the Bitcoin Fad.

So what are some other names of the technologies that are bound to create similar disruption in application development industry?

2018 is expected to provide a consistent streak of forward pushes, with machine learning and neural network technologies taking on more regular tasks. 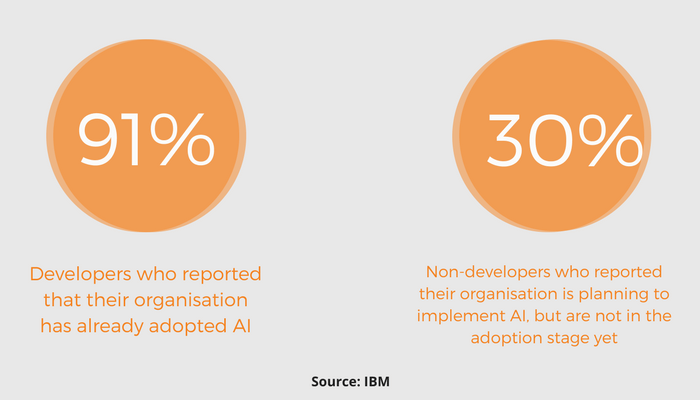 With self-driving cars, ships, and life-saving medical advances on the edge, it seems likely that the speed of technological change is only going to increase as the decade draws to a close. There are some achievements that just leave us in awe of the miracle; Google developed a new version of this AlphaGo A.I.: AlphaGo Zero. This A.I. achieved a superhuman-level Go-playing performance—it beat the original AlphaGo A.I. 100 to 0.

After Saudi Arabia Granted citizenship to a humanoid, the fate of AI has become even clearer and affirmative. Some more major advancements in AI have formed dominion in healthcare, with some systems proving more effective in diagnosing cancer than human doctors for 2018.

One AI program at the Houston Methodist Research Institute in Texas reviewed millions of mammograms—30 times faster than humans—and had a 99% accuracy in interpreting diagnostic information found in patient charts.

With so much to win, a goal that says “go do something” is something persistent all the way.

One technology has made a statement in the news all through the year and has topped the bucket-lists of some top entrepreneurs: virtual reality. VR began to grow commercially in 2016—with HTC, Oculus (owned by Facebook) and PlayStation all the way through 2017, all rolling their latest headsets. But 2018 is pivotal for VR, given its rather revered position on the “hype cycle.”

On the AR side, From playing Pokemon Go to being superbly fascinated by Snapchat’s alpha-creative filters, we’ve all have experienced its adventurous vibe, they have already set App Store records in the process. 2018 is anticipated to have much more to these advancements.

Statista’s projection based on data from Goldman Sachs for the total market value of both VR and AR is $35 billion by 2025. This market is going nowhere but up.

Do we think beyond apps when it comes to ordering food, taking a cab, finding a good doctor, or booking a Hotel?

The rhetoric was to state that none of us is ignorant about the popularity and usage of on-demand apps.  They are the contemporary trend for radical business growth. Here is a breakup of most popular on-demand apps:

According to The On-Demand Economy, there is over $4.8 billion investment in on-demand companies like restaurants, hospitals, taxi booking etc. in which $2.2 billion was invested in last year only. The financing of the transportation industry is $2.1 that includes $1.2 billion of Uber.

These services have made the “on-demand economy” part of the daily lifestyle routine of many consumers. Clubbing the potential of mobile app technology and smooth payment process, on-demand services are consistently expanding across the retail landscape. So, if you are thinking to build an on-demand app for your business, do not think anymore. Act! 2018 is going to be one of the most booming years for On-demand apps.

AMP has its own sweet spot on the list of dominating technologies of 2018. Accelerated mobile pages gained prominence after Google started extending AMP support for eCommerce websites instead of just sticking only to publishing websites and online journals.

With eCommerce giants like eBay benefiting from AMP, millions of emerging stores have started identifying it as a cool way to improve conversions, and you need to start thinking about it right away.

Google has also announced that it will provide an exclusive search index for mobile web pages which means that bringing your mobile web pages’ loading time to a bare minimum, deploying AMP would certainly serve as one of the advantages for achieving better ranking positions.

Brands that require a very basic mobile app can stick to just AMP website instead of shelling out money on mobile app development.

So this is the time you can make your mobile business richer than ever before with Google’s latest advancements in 2018!

We all owe our lives to Cloud Computing, from emailing to data handling, everything goes ultra smoothly with everything available ready to use on the cloud. With so much already been achieved in the field, the air of competition has already been a bit hot. Here are some stats that Forbes collected you’d want to look at:

Here are some figures on how many businesses are budding on cloud technology: 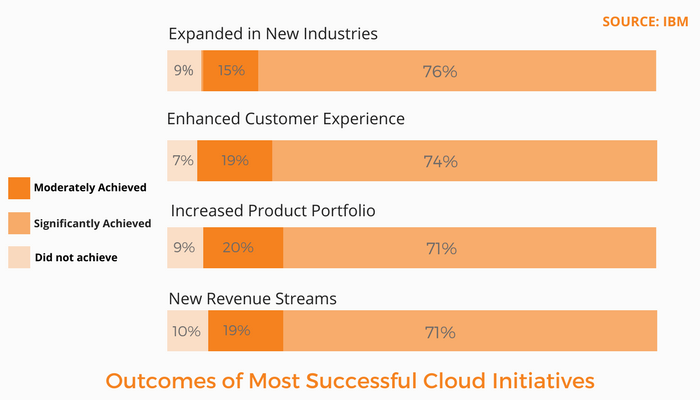 Adoption of the Cloud will remain proliferating in the Consumer and SMB/Mid-Market segments; CIO’s will pick strategic plans to take benefit of the latest contributions from cloud providers. The tools for visualisation of cloud data and processing market will keep improving. Security, Performance, and Management of cloud-based solutions will be the glitches that Cloud providers will have to overcome.

Another thing to see is Cloud storage is getting cheaper — It’s the economics of supply and demand — the higher the availability and the lower the demand, the price goes down. Although, with cloud storage, not only is there a notable supply, but a high demand too; therefore, cloud storage is not just affordable, but given for free from certain cloud providers so they can get market share and gather valuable user information. 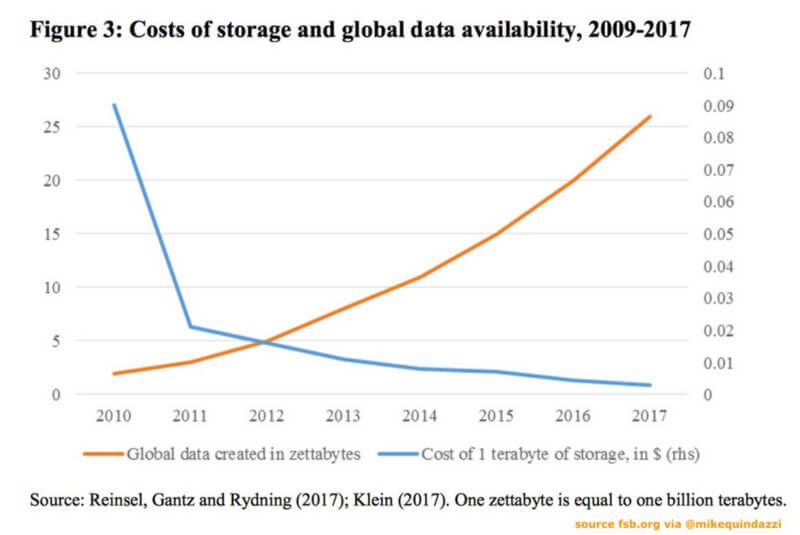 I do not think IOT needs any introduction to have all your eyes and years. Yet, here’s the bomb. Predictions by IHS state that there will be approximately 70 billion IoT devices in the network by the end of 2025, we are still at the beginning of the transformations that IoT is bound to bring to the coming years. 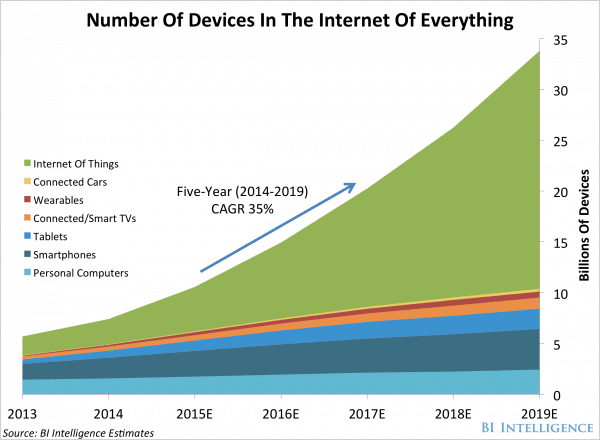 More CPU power will be spent at the edge. Getting towards greater leveraging of this technology is a noteworthy trend for 2018.

So I predict there will soon be devices that can not only see, but understand the image, and microphones which can listen. As well as ensuring only useful data is passed back to the cloud, edge computing can benefit other considerations such as privacy.

For example, a setting in which your devices and gadgets can be trained to check out for signs of dangers without impinging your privacy.

In this scenario, you might use cameras to tell if some intruder sneaks into your space. Also, you can pick up sounds like breaking glass, things falling or water spilling. And because the processing is done at the edge, we maintain privacy because nothing is sent to the cloud unless something bad happens.

We also anticipate massive growth of IoT in manufacturing and industries.

In 2018 we are likely to see this trend and more cool facts taken further with the inclusion of a greater number of external data sets into the mix. So in theory not only will your manual tell you the correct tyre pressure, it will make adjustments based on the weather or other operating conditions the machine will be facing at that moment.

Blockchain is not just another name that adds immutability and integrity to IoT transactions. And for the record, Bitcoin as a digital store of value is the least interesting use of blockchain.

Blockchain – a distributed and encrypted digital ledger – is well suited for recording details of the millions of transactions which take place between IoT machines. A rookie’s guide to blockchain is something you might need here. Here is how it works: 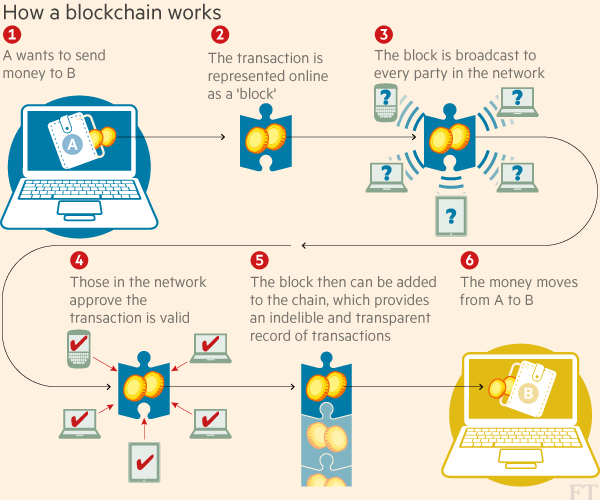 So, given that a generic transaction takes place without any interference of the third party, this technology has evolved to function in numerous other areas like online voting, Blockchain Finance, Cross-border Payments, Hard Money Lending and much more.

It’s only recently that the idea of convergence between these technologies has been widely talked about, though. A lot of big companies are working under partnerships not yet public with clients on bringing them together and hinted that more details are very likely to pop up soon.

Ethereum, the blockchain platform giant and catalyst for a huge number of decentralised applications and blockchain-based portals, has proven over the past 6 months that it is more than just a fad. It is a culture. And it is everything the Internet always wished to be: a fair and transparent way to store and transfer information.

The blockchain companies like “Long Blockchain Corp.” saw an instant rise in its stock price of a whopping 200%, according to CNBC.

So cross your fingers and just dive in to see more of buzz around blockchain in 2018.

Cybercriminals penetrated Equifax (EFX), one of the greatest credit bureaus, in July and stole the personal data of 145 million people. It was deemed to be among the biggest breaches of all times as of the amount of sensitive data that was jeopardised, including Social Security numbers.

In June 2017 alone, over 1,000 Android and iOS enterprise apps were reported to have insecure interaction amongst the apps and their backend frameworks. About 43 terabytes of data was exposed, with at least 39 apps exposing 280 million records of personally identifiable information (PII). A study in 2016 found that 90% of scanned healthcare and finance-related mobile apps had huge security issues.

Security flaws are a breeding ground for a number of mobile threats, which is why regularly testing your app’s source code against vulnerabilities, like input validation issues, is critical. The app should accordingly be agile—easy to patch and update.

Security of smartphone has become more indispensable than ever, due to the amount of personal data it stores. Apps with built-in security features make a huge difference in the application space. Coding for Apple iOS is now switching to Apple’s own programming language, Swift than Objective-C. More developers will be adopting such platforms with better User Experience (UX) and security features in the near future.

While analysts are seeing all of these trends keenly, such as IoT-enabled technologies and immersive technologies, some feel that AI will have the most influential impact on enterprises—in each industry and at each level of operations.

But nothing can be said with utmost accuracy. All we are expected to do is keep looking for small developments and implement ways to incorporate them into our work routines. For everything else, you have people like us at your disposal.

So it’s a clear-cut picture that 2018 is going to be the foundational year for next-generation advancements. I do not dare to miss! Do you??